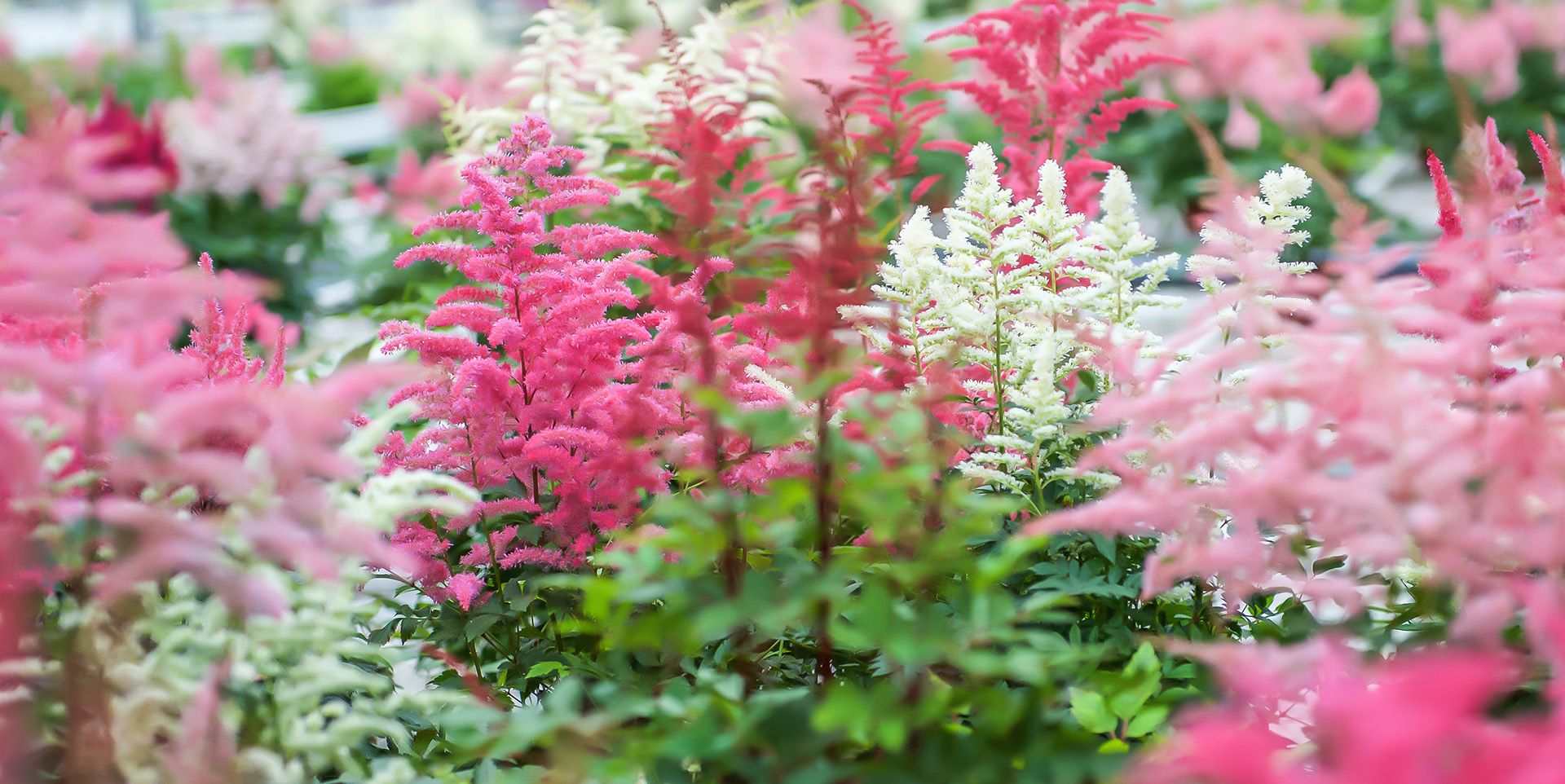 Astilbe is a plant that can be used in many different ways and feels at home both in and out of doors. It can be used as a pot plant or as a perennial in a border or bed.

An idea of its possibilities!

Astilbe
Astilbe, a member of the saxifrage family (Saxifragaceae), is a plant that originally came from Eastern Asia. In the early 20th century the first cultivars were introduced in colours other than white. Subsequently breeding programmes resulted in an assortment numbering hundreds of cultivars.

Colour
Currently Astilbe is available in colours ranging from white through pink to deep red. Foliage colours and shapes also vary by cultivar. Modern growing techniques mean that it is now possible to market good quality Astilbe from early March until the end of September.

Location
The Astilbe you buy in a pot will thrive indoors, on your balcony or patio or in the garden. It needs a well-lit spot (especially if you are using it as a houseplant). When flowering is over, you can cut off the dead flowers, remove the pot and plant the Astilbe out in a moist spot in the garden. Too much exposure to sun will shorten flowering and Astilbe will flower longer in dappled shade.

Perennial
Astilbe is a perennial, i.e. it can stay in the ground during winter even at temperatures well below freezing, when the parts of the plant above ground will die off completely. As long as you ensure the plant gets sufficient water during dry periods, it will give you years of pleasure. If, after several years, the plant has grown too big, it can be dug up and split to give you several plants.

Astilbe needs a great deal of water.
Never allow it to dry out.

Tip: stand the pot in a saucer.

Astilbe can be used indoors or outdoors.
Important: water copiously if it is exposed to full sunlight.

When flowering is over the Astilbe can be planted out in the garden.
The plant is hardy.

An Astilbe is intended for decoration and not for consumption.

Astilbe comes in white, pale and deep pink, lilac and red. Its foliage also comes in a variety of shades and shapes. It can be anything from palest to darkest green or even red.

‘Europa’ and ‘Bressingham Beauty’ are two of the pale pink cultivars we grow.
‘Washington’ and ‘Diamant’ are beautiful white cultivars and ‘Montgomery’ ‘Fanal’ and ‘Rotlicht’ are excellent red cultivars. Our range also includes “Elizabeth’ and ‘Maggie Daley’ in lilac and ‘Bonn’ and ‘Drum And Bass’ in deep pink.

The deep pink ‘Henry Noblett’ is a fairly new cultivar, named after the International Registrar for Astilbe at the Lakeland Horticultural Society, in recognition of his efforts to improve the nomenclature of Astilbe and for collecting the greatest number of different cultivars all over the world.